Despite hopes for a bottoming out, the global economy continues to cool. This theme underpinned the first press conference of Christine Lagarde’s successor, Kristalina Georgieva. The new Managing Director of the IMF began by quoting a line from the Russian poet, Alexander Pushkin: “The breath of autumn begins to ice the roadway”, noting that this unfortunately ties in with the global outlook. The organisation’s growth forecasts, last released in March, have been downgraded with it now envisioning 3% growth this year (-0.3% vs. previous) and 3.4% in 2020 (-0.2% vs. previous). Fredrik Skoglund, CIO at BIL, and his team review the major events of October 2019 and question their implications for investors.

To insulate economies, the IMF advocated that national governments allow fiscal policy to play a more central role. Kristalina Georgieva said, ‘Now is the time for countries with room in their budgets to deploy or get ready to deploy fiscal firepower.’ (Germany’s budget surplus was 1.7% of GDP in Q2, down from 2% in Q1. This is a result of Angela Merkel’s ‘balanced budget’ approach called Schwarze Null (black zero) which rules out new borrowing). This sentiment was echoed in Mario Draghi’s final press conference at the helm of the ECB (after the central bank kept rates unchanged at -0.5%). Georgieva also expressed hope that the US and China could move towards more durable ‘trade peace’.

The prospect of ‘trade peace’ catalysed positive sentiment during the month, when the US and China agreed a ‘phase 1 trade deal’. The key tenets were that China would buy more agricultural products from the US (to $40-50bn), give greater market access to US financial firms and ensure a market-based CNY exchange rate while the US suspended tariff increases (from 25% to 30% tariff on $250bn of Chinese imports) planned for October 15th. However, excitement was tempered after markets realised that the issues at the heart of the trade dispute (technological security and more structural factors) were left unaddressed and that nothing had yet been put on paper. Then, right at the end of the month, embers of optimism were glowing once more after China’s Ministry of Commerce in a statement confirmed that trade negotiators “agreed to properly resolve their core concerns and confirmed that the technical consultations of some of the text agreement were basically completed”. It seems that both sides are keen to sign a (partial) deal and the White House has said that the time frame remains the same, despite the cancellation of the mid-November summit in Chile where Trump and Xi were apparently going to sign a deal.

Optimism about the prospect of an orderly Brexit also came and went. Boris Johnson managed to piece together a new divorce pact with the EU, which saw a customs border in the Irish sea rather than incorporating a ‘backstop’ arrangement. However, on Saturday 19th October, when this was to be voted for in Parliament, MPs instead voted on the Letwin agreement meaning that a no-deal Brexit would be averted (it requires that the Brexit deadline is extended until the Brexit deal had passed each step in Parliament to become law). Johnson, on this date, was obliged by the Benn Act to write to the EU requesting an extension of Article 50. He did so but did not sign the letter and sent another letter, which he did sign, stating that he did not feel further delay was in the best interest of either side. In the end, Boris’ Brexit plan was accepted by the British Parliament, but not the timing, which would see it railroaded through Parliament in only a matter of days. The EU27 then agreed to give the UK a Brexit “flextension” until January 31st. The nature of this allows that the UK can leave earlier if a deal is ratified by its Parliamentarians. A general election is expected to take place on 12th of December, with the Conservative party hoping to consolidate its power. At the moment, the Conservatives are locked a coalition with the DUP and consensus is often elusive.

With politics blowing hot and cold, the macro landscape didn’t offer much solace. Through October, those believing data would stabilise were left disappointed.

With politics blowing hot and cold, the macro landscape didn’t offer much solace. Through October, those believing data would stabilise (especially in Europe) were left disappointed. Germany’s central bank noted that the country may have already slumped into a recession (defined as two consecutive quarters of negative growth), after already having contracted by 0.1% in the second quarter. Official figures for the third quarter will be released November 14th. Europe’s largest economy is being weighed down by its export-oriented manufacturing sector and the danger is that this weakness starts to affect services (if not already doing so). France, on the other hand, is proving to be more resistant to the global economic slowdown, and Q3 growth came in at 0.3%. Exports contribute only 31% to France’s GDP, vis a vis 48% for the eurozone. The country also has a greater share of services, at 70% of its gross value added. The eurozone’s saving grace is the fact that the labour market continues to be in good shape, meaning that the income prospects for consumers remain favourable. Sentiment indicators show that European consumers are hopeful about the future.

The Federal Reserve, to keep what is now the longest un-interrupted expansion in history going, is underway with a ‘mid cycle adjustment’ to its policy rate.

In the US, consumers continue to be confident – on paper. The University of Michigan’s confidence index rebounded to a 3-month high in October. But actual Retail Sales for September disappointed – they fell 0.3% when the consensus was expecting a 0.3% increase. As with Europe, the Manufacturing Sector is the economy’s problem child. The Federal Reserve, to keep what is now the longest un-interrupted expansion in history going, is underway with a ‘mid cycle adjustment’ to its policy rate. Having already cut by 50bps this year, the 25bp cut in October cut made its actions congruent with previous ‘mid cycle adjustments’. It seems the Fed will now pause with any further adjustments to its rate being driven by incoming data. Political risk could heat up with Democrats in the House of Representatives having published a resolution setting out the next steps in their impeachment efforts against President Trump.

Central bank dovishness and political progress with regard to both Brexit and trade negotiations seemed to have rekindled investors’ risk appetite by the end of the month and the S&P 500 reached new all-time highs. We still hold a very slight underweight on risk assets with macro data yet to find a bottom, knowing that earnings expectations for 2020 remain to be very demanding. Indeed earnings, at the end of the day, are the locomotive that pulls equity markets upwards. At the same time, market sentiment can easily be extinguished by something as simple as a rogue tweet. 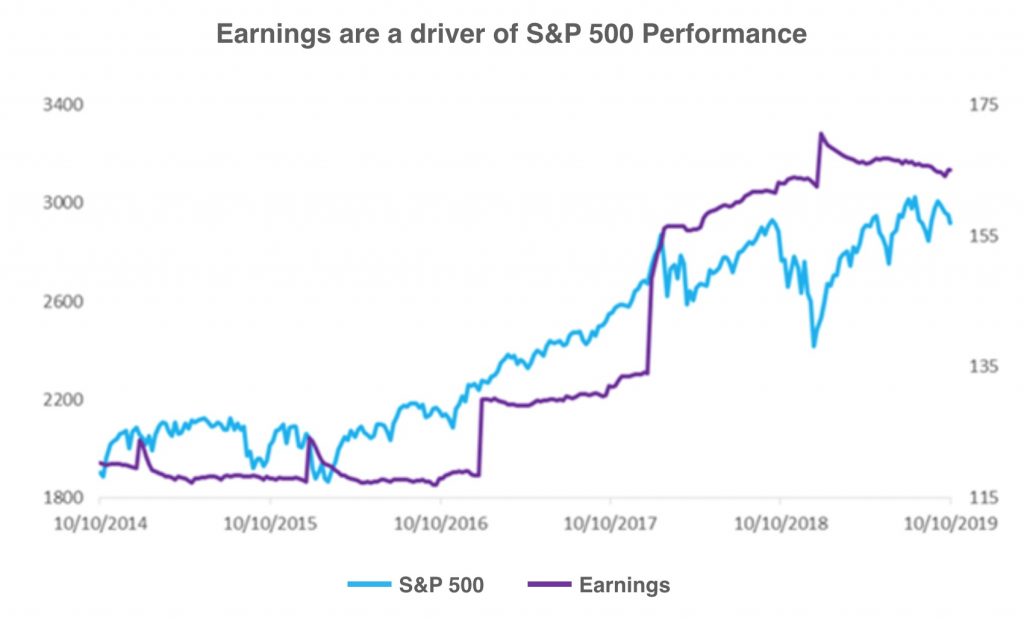