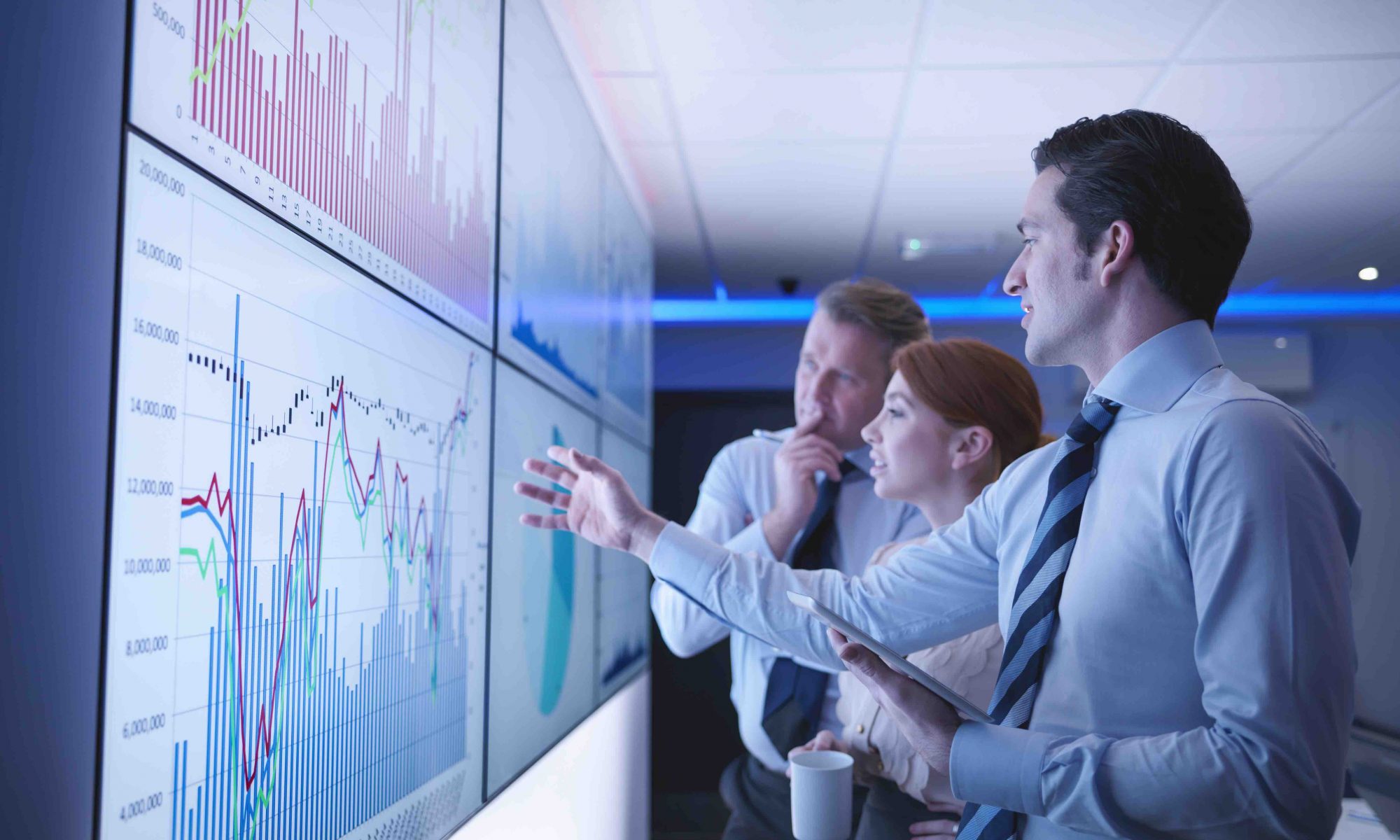 September is the month where we start to gear up for the upcoming year. A new academic year begins. In the world of magazines, the ‘September issue’ has particular resonance, for it marks the start of a forward-thinking new season, providing insights into what will be the key themes in the year ahead. In finance, September is a month when investors take the time to re-evaluate their portfolios. It is generally believed that investors return from their summer holiday ready to lock in gains as well as losses before the end of the year and this can sometimes manifest at market level in what is called the ‘September effect’. September also marks the beginning of the Q3 earnings season, which gives clues about the year ahead, via company guidance. Fredrik Skoglund, CIO at BIL, and his team review the major events of September 2019 and question their implications for investors.

Macro – Where do we go from here?

Throughout September, the global slowdown persisted. Most of the remaining economic strength lies in the US, where the consensus expects fairly decent growth of 2.3% this year. This has a lot to do with its sturdy internal market which has ceased to let up, despite falling confidence about the future outlook. The Conference Board Consumer Confidence index fell sharply in September from 134.2 to 125.1, pulled down by the deterioration of the ‘future expectations’ sub-component (down from 106.4 to 95.8). The ‘present conditions’ index remained high overall, supported by strong labour market conditions, which remain close to a cyclical high.

Looking at corporate confidence, the US Markit flash PMI for September was somewhat reassuring, as there was a slight rebound in the composite figure, from 50.7 to 51.0. Both the manufacturing and services components rose – manufacturing to 51.0 and services to 50.9. However, it is worth mentioning that the rebound occurred from 3-year lows and the data is still soft overall. The key point is that the US, despite its strong internal dynamics, is not immune to trade tensions nor the global slowdown. While we saw an improvement in business conditions, led by stronger output and growth in new orders, the asterisk here is that only domestic orders increased, since export orders and new work from abroad continue to weaken. The key question in the coming months will be whether the slight improvement we saw in manufacturing in September can continue, given the context.

On the other hand, Europe is skating on thin ice whereby the major risk is that the malaise in manufacturing seeps into the service sector.

On the other hand, Europe is skating on thin ice whereby the major risk is that the malaise in manufacturing seeps into the service sector. This is something we will be monitoring closely in data over the next months. September’s composite PMI did nothing to dilute these fears: it fell to 50.4, a stone’s throw away from 50, the line between contraction and expansion. The manufacturing component is already beneath this threshold at 45.6, whilst the services equivalent sits at 52 (down from 53 in August). For the time being, southern European countries are in better form than Germany – the so-called growth engine of the bloc – due to the latter’s dependency on exports and the global industrial cycle. Another key watch theme over the next months is whether Europe can bottom out or whether other EU nations will join Germany.

The first fortnight of September was characterised by a strong equity market rotation in terms of both sector (out of Defensives and into Cyclicals) and style (out of Growth into Value (mainly Financials)). Our analysts believe this was the result of short-covering, as well as a reaction to moves in interest rates, rather than some shift in the fundamental outlook. In short, it was sentiment driven. 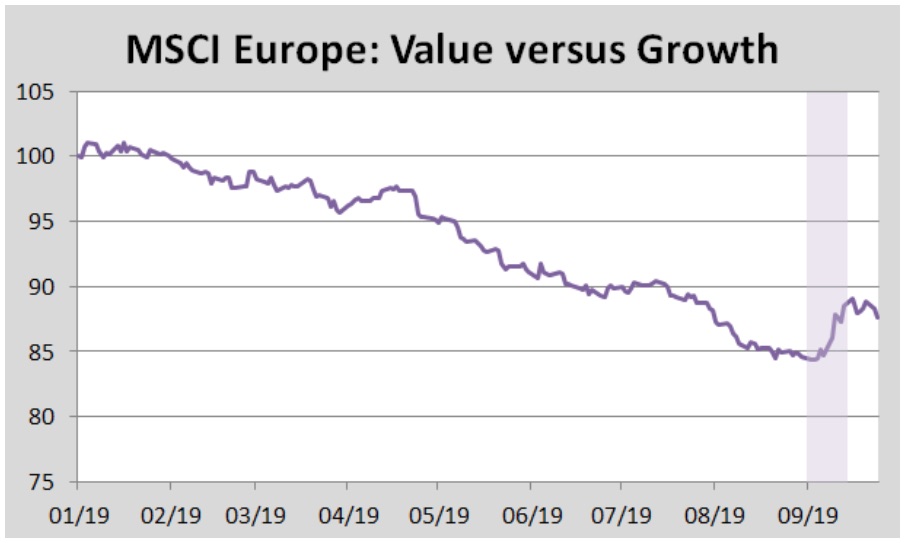 By the middle of the month, the rotation had levelled out. In the end, fundamentals are always the market’s guiding North Star, but in the short-term, investors can get caught up in sentiment. At our Asset Allocation committee, we decided not to bet on whether or not this sentiment-driven trend would continue in the short-term and decided to neutralise all sector bets. In terms of style, we continue to favour the GARP trade (Growth at a reasonable price).

Earnings season is now underway and the hurdle for companies to overcome is pretty low due to a series of downgrades to analyst expectations. However, what we do note is that whilst 2019 estimates were revised down quite sharply, 2020 figures barely budged. Already some companies (e.g. Fedex) have lowered earnings forecasts for 2020 as hope that there will be a quick solution to the trade war fizzles. The risk is that for a lot of companies, for current 2020 estimates to be met, we will need to see a stabilisation on the macro front or a trade truce. If these don’t materialise, there’s room for disappointment.

Central Banks – Do government need to bring fiscal spending to the table?

Central banks stole the show mid-month. First, the ECB unveiled a mass easing package: A new open-ended round of QE, starting in November (at a pace of €20bn per month); a rate cut which brought the deposit rate to -0.5%, sweeter TLTRO terms (making conditional loans to banks more favourable), a tiered-interest-rate and a new tiered deposit system (whereby a portion of bank deposits, currently set at six times their mandatory reserves, is exempt from the negative deposit rate).

The Fed cut interest rates by 25bp to a range of 1.75-2%, as was widely expected. The dot-plot revealed that the board foresees no more cuts in 2019 but it also revealed that voting members are highly divided with regard to the appropriate action to take moving forward. The Chairman, Jerome Powell, who has been dubbed the ‘Artful dodger’, declined to signal what will be the course of central rates going forward. President Trump again vocalized his criticism, feeling that the Fed is not doing enough to bolster the economy.

There is a growing rhetoric that central banks are left with little ammunition and we may be approaching the tipping point where governments have to step in with some fiscal measures.

On this front, there is a growing rhetoric that central banks (particularly the ECB) are left with little ammunition and now we may be approaching the tipping point where governments have to step in with some fiscal measures. Mario Draghi recently told the FT: ‘I [have] talked about fiscal policy as a necessary complement to monetary policy since 2014. Now the need is more urgent than before.’ Hints of willingness to unlock fiscal packages will be a key watch item in the months ahead.

The fragility of our global energy supply was highlighted in September following a drone attack on two key production sites in Saudi Arabia, wiping out roughly 5% of the world’s oil supply (5.7 million barrels per day (mbd)). The oil supply collapse was bigger than the one resulting from Iraq’s invasion of Kuwait in 1990 (4mbd) as well as the loss of Iranian production in 1979 – both of these oil shocks were followed by a recession. The subsequent price rally was intense – the biggest jump in 30 years – with crude prices rising almost 20% intraday, before President Trump said that Strategic Petroleum Reserves could be released if required. However, as September drew to a close, Saudi Arabia was almost back to ‘BAU’, and the fear of a supply shock seems to have evaporated with oil reverting back to previous pricing patterns.

Politicians get a reminder that they are not above the law

British Parliamentarians were forced back to the office after the UK’s Supreme Court ruled that Boris Johnson’s prorogation was unlawful. Lady Hale, President of the Supreme Court said: “Parliament has not been prorogued. This is the unanimous judgment of all 11 justices.” Europe and the UK have made little progress in Brexit talks while the October 31st deadline looms. European Commission President Jean-Claude Juncker told a German newspaper: ‘Our chief negotiator Michel Barnier and I are doing everything possible to get an agreement… But if we don’t succeed in the end, the responsibility would lie exclusively on the British side.’ The British Pound continues to be at the mercy of politics.

Donald Trump became the fourth US president to face impeachment proceedings after Democratic House speaker Nancy Pelosi accused him of betraying his oath of office and US national security by seeking a foreign power’s help in the 2020 election. The impeachment process usually takes months and it is unsure whether this will pass through the Senate. As to what impeachment means for markets, it is difficult to say. It is a rare event and market outcomes in the past (in the case of Nixon/ Clinton) were very context-specific. During the investigation in the six months before Nixon resigned, the S&P500 declined about 20%, but on the other hand, Clinton’s impeachment was almost a non-event for markets. In the two months before Clinton’s Senate acquittal in February 1999, the S&P500 rallied about 10%.

Through October, as Autumn sets in, we will be monitoring company earnings and the events surrounding Brexit as the Halloween deadline nears. More US tariffs on $250bn worth of Chinese goods were delayed until mid-October, as a ‘gesture of good will’ to respect the 70th anniversary of the People’s Republic of China on October 1st. If these come to fruition, we can expect some volatility around this time. Later on, on November 13th, the US will decide whether or not to impose levies on European cars.