The first change involves the introduction of a new tax scale. Here is the breakdown for tax class 1: 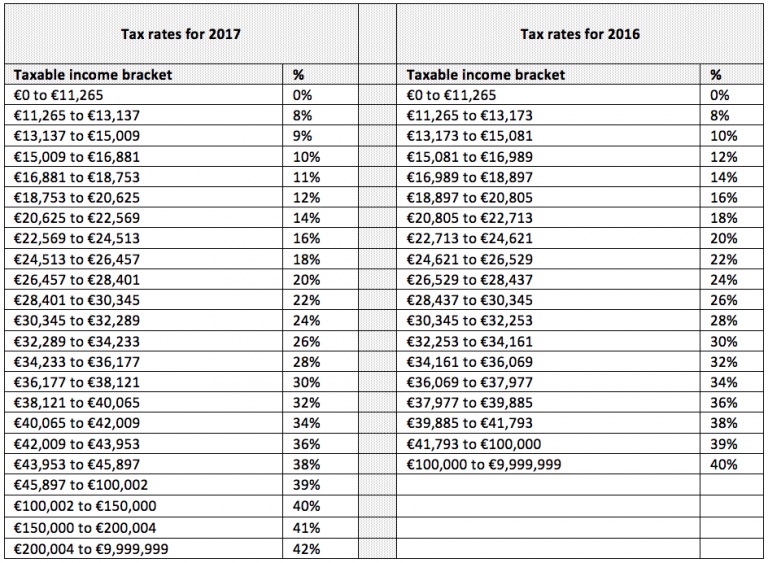 If you’re a cross-border worker, please study this table carefully. Many of you who were not in this tax class before will now come under this bracket. Many of the changes under the reform are related to the status of married cross-border workers. Before the reform, these taxpayers came under tax class 1A or 2 (if more than 50% of their household’s employment income was earned in Luxembourg). In class 2, couples are taxed jointly based on income earned in Luxembourg only, without taking into account the couple’s foreign income.

From 1 January 2018, cross-border workers will be taxed individually on their Luxembourg income in class 1, without taking into account married status, regardless of whether their spouse also works in Luxembourg or whether they have dependent children.

From 1 January 2018, cross-border workers will be taxed individually on their Luxembourg income in class 1, without taking into account married status, regardless of whether their spouse also works in Luxembourg or whether they have dependent children.

Cross-border married couples may still elect to be taxed under class 2, but only if they file a joint request and subject to the following conditions:

Cross-border workers will now be required to file a tax return if they want to benefit from tax class 2. If they have foreign income (rent, partner’s salary, etc.) in addition to their Luxembourg income, their total net income calculated in accordance with the Luxembourg tax rules will be added together to determine a total or average tax rate. The salary of the spouse that doesn’t work in Luxembourg will be taken into account to determine the tax rate. Naturally, this tax rate will only be applied to income earned in Luxembourg.

The new tax class rule represents a significant change. Until now, only Luxembourg income was taxable, and not income earned in the country of residence.

NB: This rule also applies to retired employees who have worked in Luxembourg and their country of residence.

Cross-border couples must inform the Luxembourg Inland Revenue (Administration des contributions directes) of how they wish to be taxed either before 31 December 2017, at any time during 2018, or during the first three months of 2019. They should receive a response by post.

Finally, here is a table summarising the tax classes for cross-border workers after the reform:

Again, we would recommend looking closely at the changes regarding tax classes for married couples (tax rate change), and analysing the pros and cons of including foreign income with Luxembourg income to determine your tax rate.

If you would like more information, please consult the Guide in the Grand Duchy (French).