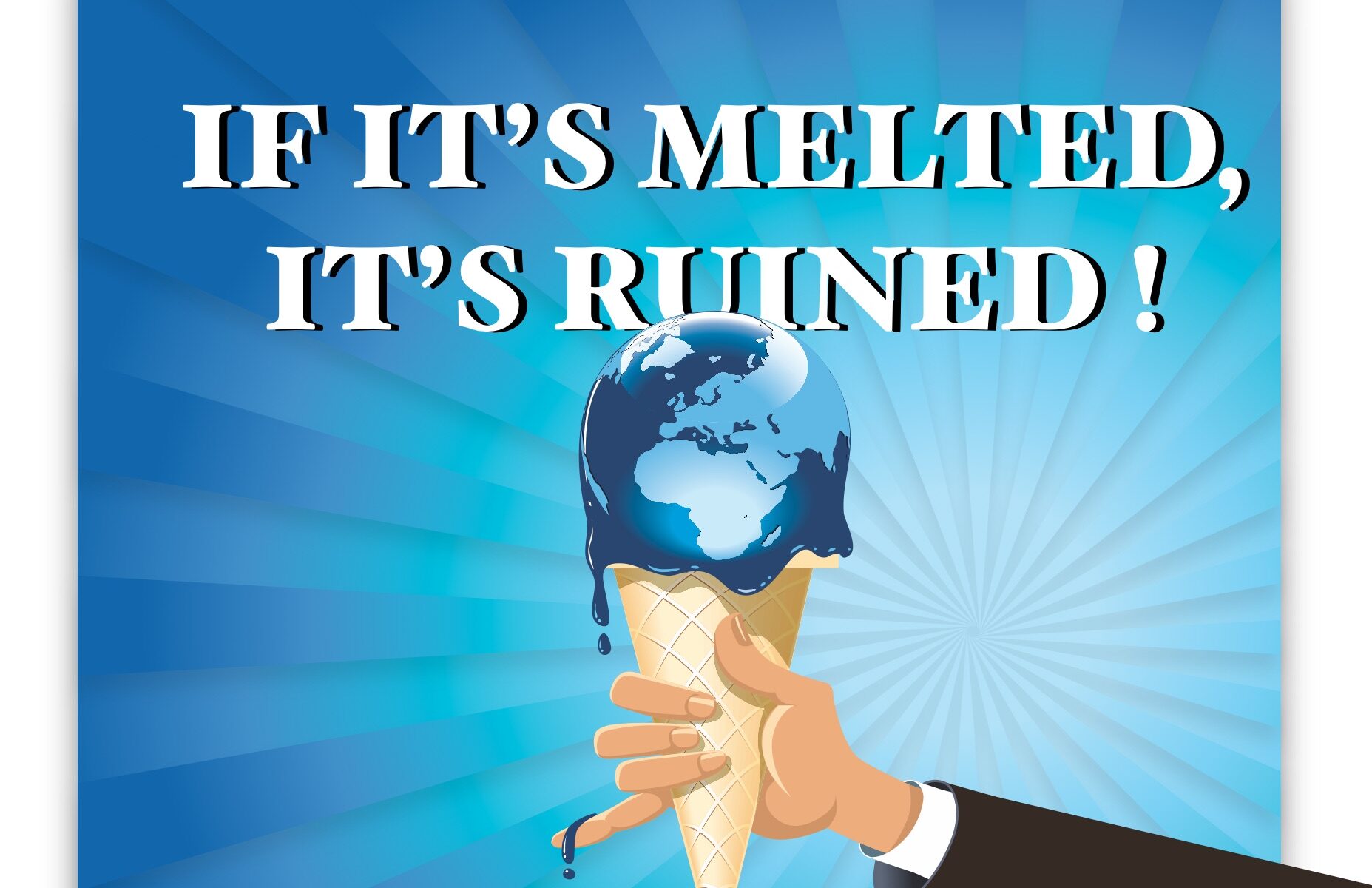 Some years ago, Ben&Jerry’s, the ice-cream manufacturer, ran a marketing campaign that showed a green and blue scoop of ice-cream accompanied by the slogan “if it’s melted, it’s ruined”- an obvious metaphor for global warming and its impact on our planet. The company has been an inspiring leader in adapting its operating model to anticipate and adapt to our societal and environmental challenges.

For the sake of transparency, readers should understand that this article is basically a personal transcript of my preferred podcast, a perpetual source of inspiration, “Outrage and Optimism”, from the June 26, 2020 episode with Paul Polman (former CEO of Unilever).

For a lot of us in the Northern Hemisphere, climate depredations are still mostly invisible. However, the current Covid-19 pandemic has served as a wake-up call to our fragility. In my opinion, denying climate change is now tantamount to saying that you don’t believe in gravity.

While most public sector initiatives to date have focused on driving down the demand for fossil fuels, a handful of jurisdictions have also placed limits on the supply side, on the production of new fossil resources. Did you know, for instance, that Costa Rica has had a moratorium on fossil fuel exploration for years? A law prohibiting oil and gas exploration forever is under consideration.

In a sign of the times, a major European oil company recently announced it will write down $17.5 billion of its balance sheet after downgrading its oil & gas price forecasts, cancelling several long-term projects and recognising changes in transport and travels patterns and the shift away from fossil fuels: A sure sign that carbon emissions tax and accountability are taking hold.

Broadly speaking, most of us understand that it’s time to act beyond linear mentality of extraction, production, distribution and throwing away in favour of a circular framework. As such, we could be proud of EU leadership on a green deal and should be proud of Luxembourg becoming the first European country to launch a reference framework for sustainable bonds. Beyond that, it has also become the first European country to sell a sovereign sustainability bond, raising €1.5bn. Half the proceeds of the issue, which was eight times oversubscribed, will be spent on green projects and the other half on social impact initiatives.

Running a business during the current pandemic is a harsh and demanding responsibility. Companies that have taken a broader perspective, taking care of their employees and suppliers, have tended to fare better. Those who have gone beyond their call of duty by protecting lives and livelihood have seen their businesses rewarded.

In a previous article, I quoted Yuval Noah Harari mentioning that economists should not define our goals. The same is true for business. Shareholder return is needed to provide capital and reward risk-taking. But shareholder return is a result of what companies do, it should not be the objective. Rather, fruitful focus on stakeholders drives long-term shareholder returns. A multitude of evidence now demonstrates that investing in a sustainable supply chain, reporting on value chain risk, internalizing the price of carbon, building a more balanced workforce and ESG integration makes a company more resilient and profitable. Transparency and trust are the simplest bases of prosperity.

Transparency and trust are the simplest bases of prosperity.

Stakeholder capitalism, the idea that businesses should respond to the needs of all stakeholders1, not just their shareholders is now accelerating. In a world where some of the largest private companies are becoming mammoths in size (sometimes even bigger than the GDP of the vast majority of countries), we should not expect the government alone to protect citizens. This is even more true at a time when some of the biggest countries are clearly behind the curve on structural priorities.

Obviously nobody wants an unsustainable future, inequality, global warming. There is no time for further procrastination, we need to run the path of resilience. Science is clear, beyond 2030 there will be “no putting the genie back in the bottle” with regard to climate change, which will of course affect economic stability and the value of investments.

A redesign is ongoing in which shareholder primacy is going to be obsolete. Fiduciary laws express that money should be invested in the best interests of the investor, in due regards of the safety of capital and return. From a legal perspective, sustainability is part of the equation. From a financial perspective we should never forget that he have the power to vote with our money. We should not sit, watching history happen, we should act and create it.

The lesson of the pandemic is that you cannot have healthy people in an unhealthy planet.

The lesson of the pandemic is that you cannot have healthy people in an unhealthy planet. The links between biodiversity, climate change and health are scientifically clear and factual. We now have the opportunity to re-build our economies. This needs to be done on inclusive and sustainable perspectives. A redesign of the global economy is ongoing. A redesign of our healthcare system, our energy system, our food and agricultural system as well as the social contracts within society are the priorities. This will request cooperation and leadership. This is not wishful thinking, it’s optimistic thinking for a regenerative future. It’s a huge challenge but there is simply no planet B. Companies with strong meaning and purpose are simply more resilient.

The day has come for a stakeholder society. There is currently zero tolerance for corporate misbehaviour. Companies which are stepping up and taking a broader view are leading us towards critical mass. Speed and scale is crucial. Collaboration and transparency are the models. Bringing human considerations back into what we do is the recipe. 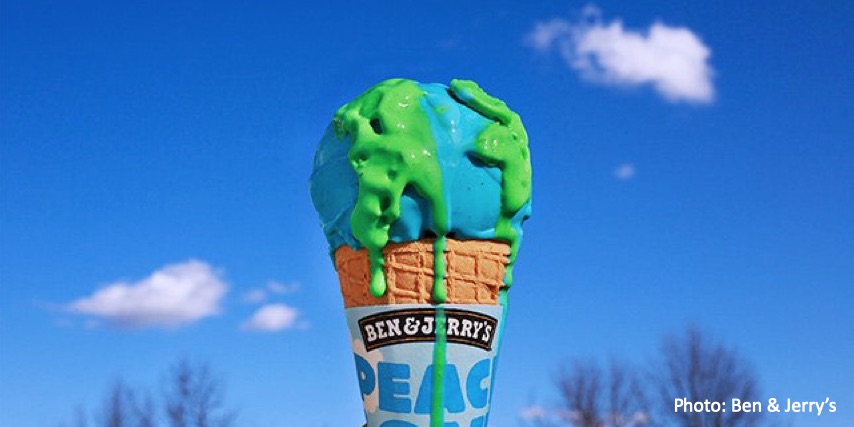 Before being bought by Unilever2, Ben & Jerry’s was a leader, a model of corporate responsibility. Not because of their eye-catching ads but because of the central role it played in developing and enacting corporate purposes. The CEO of the company said at that time: “When you are led by values, it doesn’t cost your business, it helps your business. It’s not a cost, it improves your profitability.” That may seem counterintuitive at first, he says – but it works. “If your support the community, they will support you.” The company pioneers the pursuit of business with the double bottom-line of profits and people. Considered in the 1990s as some sort of corporate hippie, Ben & Jerry’s is now perceived as a lesson in how stakeholder capitalism has a role to play in repairing our society. The bottom-line is that climate change is everybody’s business as citizens of planet earth.

1 Employees, customers, suppliers, anybody they engaged with, as equal stakeholders

2 While the takeover by Unilever was controversial at the time, it’s worth to keep in mind that Unilever is currently perceived as a leadership towards corporate responsibility. Some sort of happy end for history book.