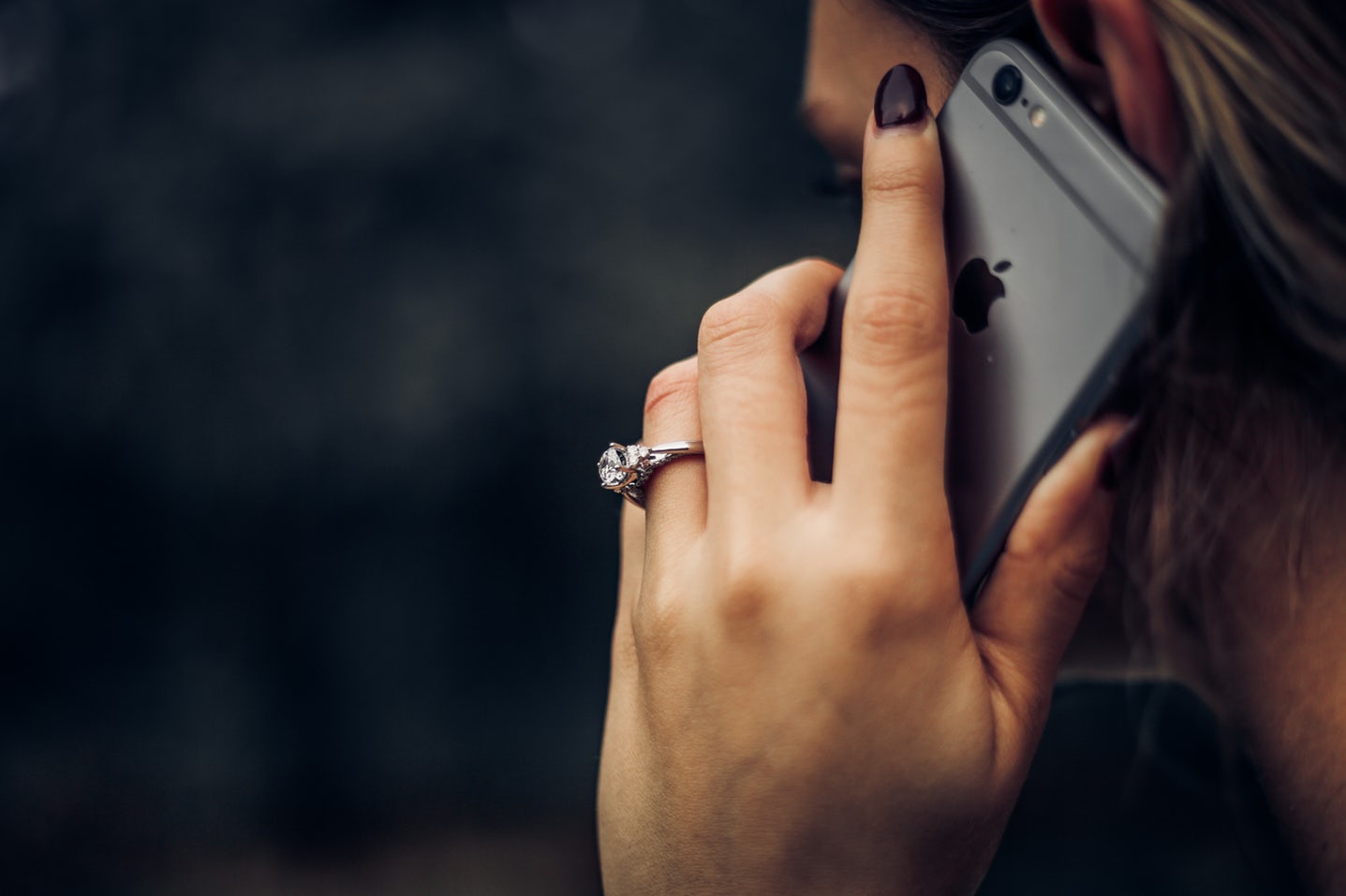 Diamonds can be double-barrelled in terms of the returns they offer investors. They can bring long-term value, as well as intangible benefits such as status and prestige attained by the wearer. However, investing in diamonds is not a simple feat, there are many factors that influence a diamond’s value which should be taken into account by investors.

As Shirley Bassey’s classic goes, diamonds are forever. Indeed, they are one of the hardest naturally occurring substances known to man which is why they are widely used in industrial drilling. Their durable and unbreakable nature gives them an edge over other alternative assets and luxury goods such as classic cars, furniture and furs which can depreciate over time. These precious stones are also globally recognized as ‘valuable’ making them a portable store of wealth.

However, unlike gold and other precious metals, diamonds are not homogenous; there is no universal world price per gram of diamonds. Diamonds need to be valued individually based on four key factors:  carat, colour, cut and clarity (the 4Cs). All of these factors interact in order to determine the value of a stone, thus making it tricky to accurately track their value as an investment. However, the Gemological Institute of America (GIA) – a trusted and long-standing global authority – has created the International Diamond Grading System which has become a widely-used method for assessing diamonds, allowing investors to better understand the quality of their stones.

Carats are the standard units used to measure the weight of diamonds. One carat is equal to 200 milligrams.

Carats are the standard units used to measure the weight of diamonds. One carat is equal to 200 milligrams and each carat consists of 100 ‘points’. The word carat comes from the Italian carato, which derives from the Greek phrase kerátion κεράτιον meaning ‘carob seed’. In historic times, carob seeds were to measure the weight of jewellery because it was believed that there was little variance in their mass distribution.

All else equal, the price of a diamond increases with the carat weight because larger diamonds are uncommon and more highly coveted. In June 2017, a ring containing the 26.27 carat ‘Tenner’ diamond  (named as such because it was purchased form a car-boot sale for £10 having been mistaken for a piece of costume jewellery) sold for $1.1 million; double its estimate. Then, in November 2017, a necklace featuring a giant 163.41-carat colourless diamond — the world’s largest of its kind — sold for $34 million at Christie’s auction house.

Before they are ‘cut’ by specialists, rough diamonds do not shimmer and sparkle as they are known to. The quality of the cut affects a diamond’s propensity to shine and diamond cutting takes a high degree of precision and craftsmanship. A diamond’s ability to interact with light is measured on three dimensions: 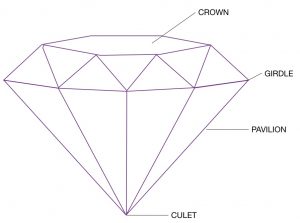 A diamond’s cut is essential to its beauty and value. The GIA uses a six-point scale to assess the quality of the cut ranging from Excellent to Poor.

A diamond’s cut is essential to its beauty and value. The GIA uses a six-point scale to assess the quality of the cut ranging from Excellent to Poor. The best cuts give an even pattern of bright and dark areas within the stone. Brilliant cuts, such as the round cut and the princess cut, are designed to maximize the sparkle of the diamond. Whereas elongated ‘fancy cuts’ can make a diamond look bigger than its actual carat weight – for example the marquise, oval and pear shape cuts….

Diamonds come in an array of colours which we can divide into two sub-sets – white diamonds and coloured diamonds: Each has its own grading scale.

For white diamonds, the presence of a yellow or brown tinge will lower the value because it hampers the ability of the diamond to reflect colours. The GIA grades white diamonds on a scale from D (colourless and most valuable) to Z (possessing a brown or yellow hue). All D-Z diamonds are considered white, even though they contain varying degrees of colour. To the untrained eye, variations between D, E, and F graded diamonds are difficult to detect. Diamonds graded less than ‘K’ have an obvious hue – normally yellow.

Diamonds with a high saturation of colour are by far more rare and are graded on a separate scale. The rarest and most valuable colors are saturated pinks, blues, and greens.

Diamonds with a high saturation of colour are by far more rare and are graded on a separate scale. Yellow diamonds are one of the most common ‘coloured’ diamonds and are often marketed as ‘canary diamonds’. The rarest and most valuable colors are saturated pinks, blues, and greens.

In April the Pink Star, a 59.6 carat fancy vivid pink diamond, achieved the record of world’s most expensive piece of jewellery. Previously, this title had been held by the Oppenheimer Blue – a 14.62 carat vivid blue diamond – which sold for $71.2m.

Diamonds are formed deep in the earth’s crust when carbon is subjected to immense heat and pressure. Because they are naturally made, they can contain flaws or specificities, referred to ‘inclusions’ or ‘blemishes’.

Inclusions are present inside the diamond – there may be clouding, feather-like markings or even a mineral crystal trapped inside for example..

Blemishes are external characteristics, which can also be created accidentally during cutting – for example,  abrasion (nicks along the facet), lizard skin (a bumpy surface), or scratches…

Evaluating diamond clarity involves determining the number, size, nature, and position of these ‘flaws’, as well as how these affect the overall appearance of the stone. The fewer blemishes and inclusions a diamond has, the more valuable it tends to be. A ‘Flawless’ diamond (FL) has no inclusions and no blemishes visible to a skilled grader using 10x magnification. The lowest grading is ‘Included’ and diamonds with this grading have inclusions that are obvious under 10x magnification which may affect transparency and brilliance.

Overall, before making a purchase decision, investors and buyers should understand that the diamond industry is a complex marketplace and they should have at least a basic understanding of the various dovetailing, intricate details that determine a stone’s value. Buyers are advised to purchase from a reliable and trustworthy source, perhaps seeking a second opinion. The diamond industry is still fairly unregulated compared to that for more standard assets such as stocks and bonds, and the ability to detect overpricing or even frauds, for example, is essential. However, unlike stocks and currencies, diamonds are tangible items that retain intrinsic value. Because they are largely uncorrelated with the stock market, they can also be used to achieve a degree of portfolio diversification whilst offering what behavioural finance would call ‘expressive benefits’ – those that enable us to signal to ourselves or others our values, social class, and tastes.

The diamond industry has had a lot of negative publicity concerning its supply chains and conflict diamonds. With some of the world’s largest producers – namely De Beers – adopting blockchain technology to trace diamonds from the mine to the consumer, the industry will potentially be cast in a more positive light – an important shift given the increasingly ethical consumer.

However, it is yet to be seen whether such efforts alongside intensive marketing drives by the biggest names in the industry will win over the Millennial generation who have been shown to prefer experiences over physical goods. For years, diamonds have been studded in our culture as a de facto symbol of love (thanks to marketing campaigns) and status. However, what is important for investors to foresee is the sustainability of these trends in the next decades – after all, a diamond – or any other asset – is only worth what another party is willing to pay for it.

On a bright note for diamantaires and investors, the 2017 Global Diamond Industry Report by Bain & Company reports that global rough-diamond demand is projected to grow at an average annual rate of about 1% to 4% up until 2030; whilst supply is projected to grow 0% to 1% per year – thus allowing the precious stones to maintain their rare and desired status.