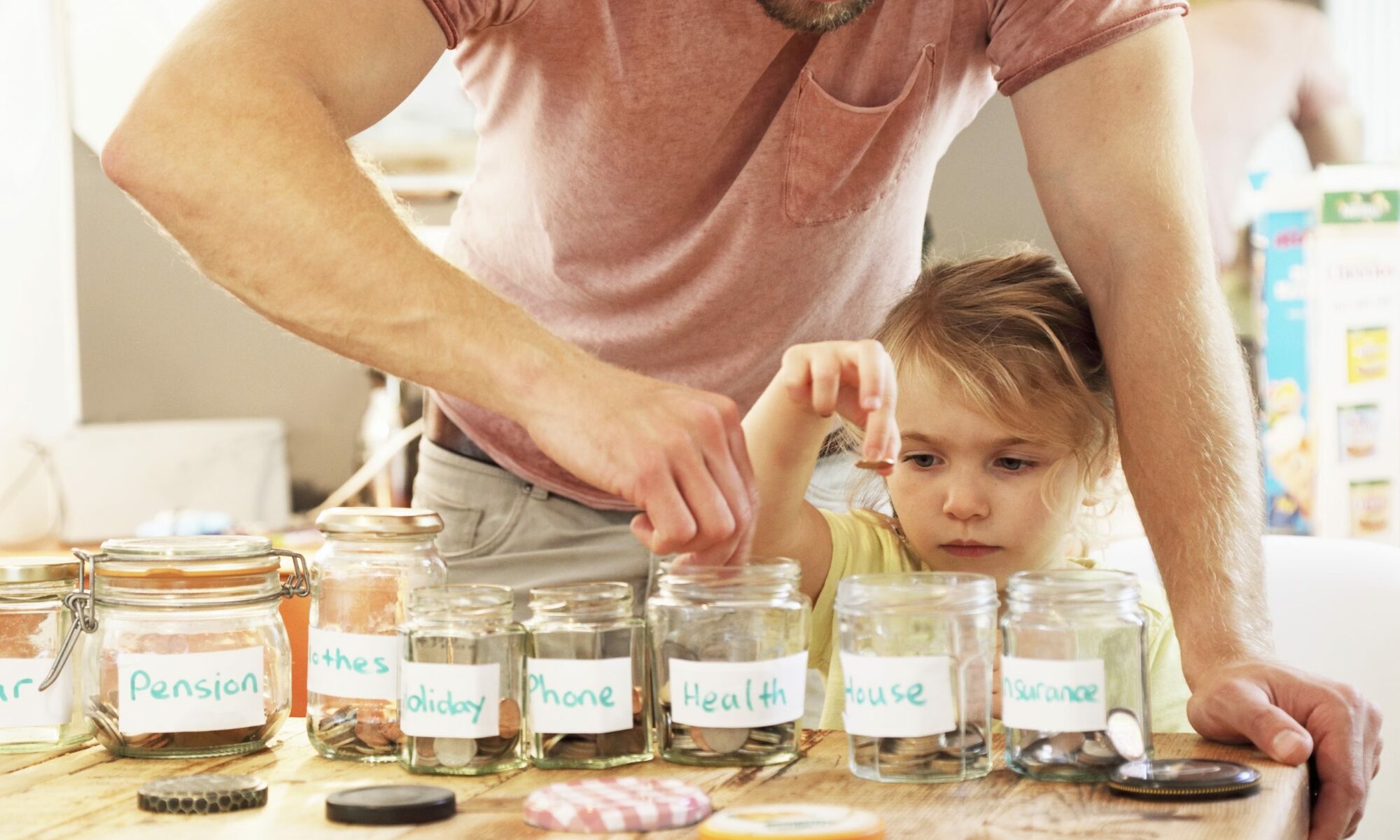 Do you want to teach your children about money? That’s great, as long as you realise it takes more than words. To be effective, you need to back up what you say with action. Here are some practical tips to help you.

Did you know that when it comes to money matters, almost everything is learned before age seven? Your children’s habits won’t be guided by lofty abstract discussions; they will most often end up imitating their environment. Your children look up to you; it is your responsibility to model good practice for them. That’s easy to say, but where do you start? Not only by explaining things, but also and most importantly by ensuring that you do as you say.

Practise what you preach!

Whether we’re talking about our children’s general education or their financial education specifically, we mustn’t simply focus on imparting knowledge. As well as providing knowledge, we also need to be able to help them develop know-how. Your environment and that of your child is more important in practice than any theoretical instruction you can deliver.

For this reason, it is important that what you say about money and how you spend it when your child is around is consistent. There is no use hammering home the point that avoiding unnecessary expense is important if you are then going to take them out shopping the next day and let them see you lavishly splashing out on pleasure purchases! Actions really do speak louder than words if you want to get your message across to children. When it comes to learning about money, “do as I say, not as I do” truly is a recipe for failure.

It is important that what you say about money and how you spend it when your child is around is consistent.

Whatever you choose, practise what you preach and be consistent! By following this principle, it becomes easier to talk about money with your children and put it into practice.

The simplest approach to teaching about money is to start from the beginning, i.e. get into a habit of talking about money with your children when they are small. Explain to them in very simple terms what you’re doing, what you’re buying and what your reasoning is behind making certain purchases. You don’t need to tell them everything or to give them an in-depth rundown of your finances or your income. Just make sure that money doesn’t become a taboo subject and talk about it as a reality of day-to-day life in society.

Don’t complicate matters. Simply explaining to them that you’re going to buy some bread from the bakery for dinner is already a good starting point. Then, gradually begin to show them how money really works, i.e. it is an exchange amount that allows you to pay for goods or services. Try to use cash when making payments so they can see it as something tangible, especially with younger children. They need to see the exchange in action: one loaf of bread for a few euros.

Try to use cash when making payments so they can see it as something tangible, especially with younger children.

Later on, you can then involve them in writing shopping lists. They will then understand that money allows them to buy goods that meet real needs. When they are familiar with list-making, ask them to help you to prioritise the purchases and eventually shorten the list.

Let them have a go and make mistakes

Since your children will be with you when you go shopping, they need to understand that money is a finite resource, and should be treated seriously and sparingly. To do so, the best thing is to let them have a go themselves, which naturally means making mistakes.

If you’re at the supermarket, this is a great opportunity to encourage financial decision-making and independence. Give them a (very) small budget and let them choose what they want to buy with it. Give them enough freedom so that it remains a genuine choice! To learn, they need to have the freedom to buy what they want. It may be that they will later regret what they have bought or will ask you for more money. Your role is to stand your ground so that they learn to manage their regret and avoid making the same mistake again. It is important to remain firm, even in the face of a few tears.

Remember that we can only progress in life through trial and error. Your aim is to help them to grow and not to meet their every whim.

Teach them to save

Learning to save is not only a basic financial habit, but it’s also a necessary discipline that provides greater security and independence. Learning to save means learning to delay instant gratification in favour of an objective or a future project.

Although early interactions between your children and money will probably involve spending, it is also crucial to teach them a very important concept: delayed gratification. This means that we can’t have everything all at once and that we must agree to exercise restraint today to be able to have something even more important tomorrow.

Your children see you using money to buy goods, including for them. But they don’t necessarily realise that you also set money aside for later. They should therefore be taught from a very young age that the money available isn’t only to be used to spend now, but can also be saved and indeed invested.

Help your children to get into the habit of saving by giving them a money box or a savings jar where they can keep their money. Here again, it is better to use cash to make it a more concrete example.

With young children, you will have more of an opportunity to teach them the merits of saving by linking it to short-term goals.

Make sure, however, to link the lesson of saving to goals, especially at the beginning. Learning to save for saving’s sake could be too abstract and counterproductive. With young children, you will have more of an opportunity to teach them the merits of saving by linking it to short-term goals. Saving over two to three months to buy a toy that they really want truly constitutes a moderate effort for an age-appropriate period of time. Asking them at six years of age to save for university makes little sense.

To understand how difficult delayed gratification is for children (and many adults!), you just need to try out the marshmallow experiment at home. This cognitive test was developed in 1972 by researchers hoping to study brain function when children were asked to wait before receiving a reward. 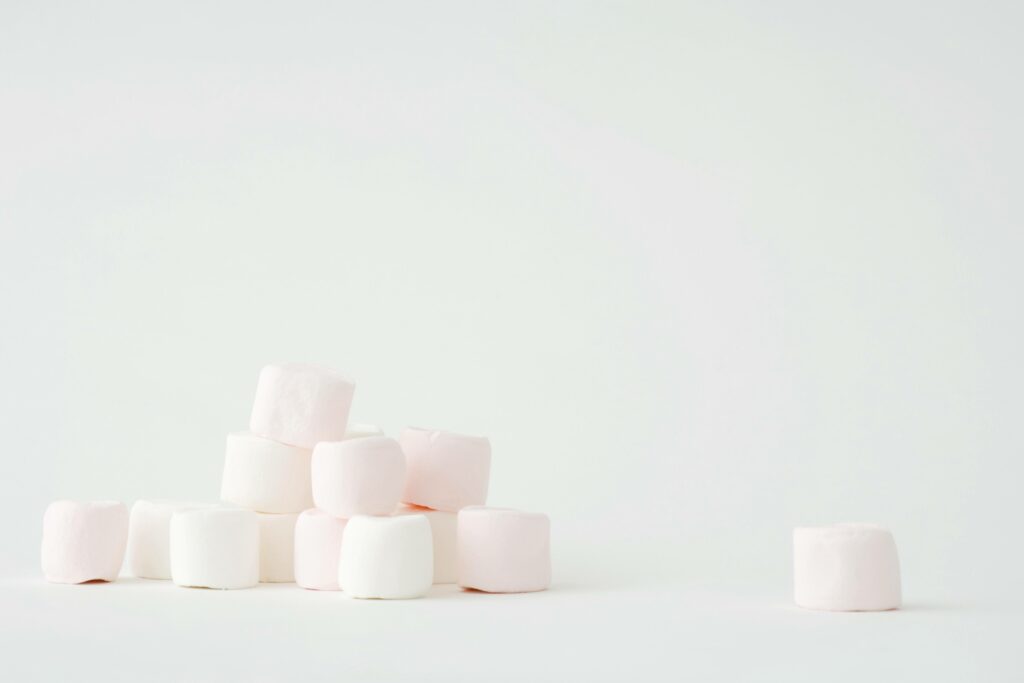 The principle is as follows:

This well-known experiment touched generations of researchers through videos of children trying not to think about the marshmallow, and then nibbling their fingers to resist temptation and ultimately, in 2/3 cases, giving in and eating it despite all their efforts.

As well as being an adorable experiment, which has its limitations, it also demonstrated that being patient and disciplined increases the chances of academic and professional success. Those who are capable of learning and applying the principle of delayed gratification have more chance of success in life than those who always favour instant pleasure, thus jeopardising their future. It’s hardly ground-breaking stuff, but it’s definitely useful to remember.

Moral of the story: playing shop with your child has its benefits!