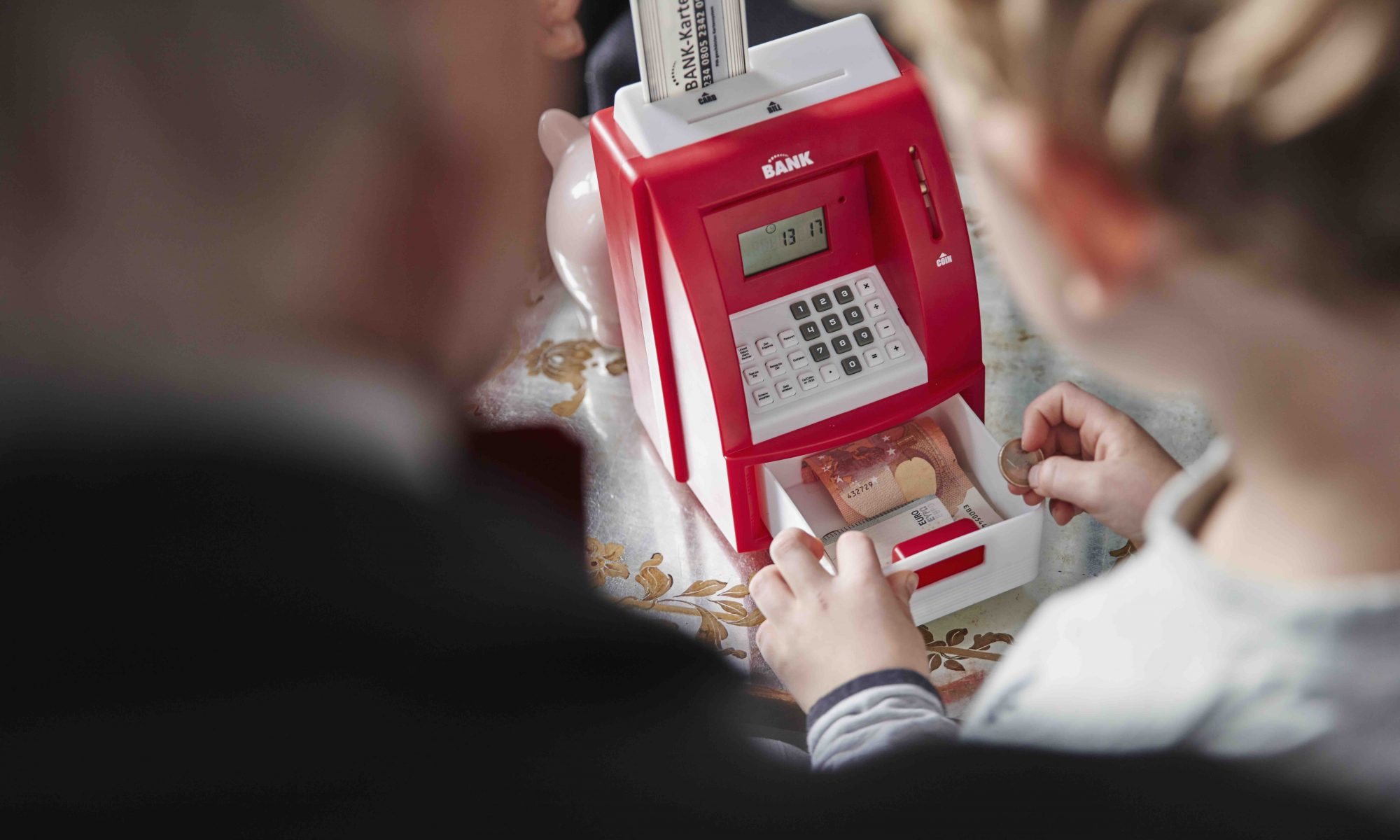 Giving your child pocket money helps them learn responsibility, and is a first step towards adulthood. But budgeting isn’t something anyone can do overnight. It’s a skill you must learn, preferably with a little guidance. And since it’s never too late to form good habits where money is concerned, myLIFE has put together some sage advice on the subject. Help yourself, it’s free!

A spoonful of sugar

For children, play is crucial to the learning process, and learning to manage money is no exception. This is especially true for very young children. It will help them remember what they’re told, and the fun they have – feeling different sized coins, for example – won’t get in the way of the lesson itself.

Looking for a good, educational gift for your child? There are a number of games out there designed to test children’s ability to save money, teach them what it’s for, and help them manage it. Be it a board game like Pay Day or a toy market stand complete with cash register, having fun with money is a great way to learn!

Try not to intervene too often to stop your child from making a mistake. It’s better that they make the wrong decision now, when there’s not much at stake, than when they’re all grown up.

Let your child do whatever they like with their money in the beginning. When they inevitably mess up, they will have to face the consequences. When this happens, don’t make a fuss, just help your child learn from the situation calmly. For example, if they are (understandably) tempted to spend all of their pocket money on sweets at the store, let them. Later, when they don’t have enough for something else they want, they’ll realise the importance of saving for a rainy day.

Whatever you do, don’t cave at the first sign of a tantrum. Once your child has spent their pocket money, it’s a mistake to buy them something else they ought to have used it for. They need to learn that you can’t have everything in life.

Ideally, you want to help your child develop good habits at an early age. A good time to start is when they’re seven or eight years old.

Ideally, you want to help your child develop good habits at an early age. A good time to start is when they’re seven or eight years old. In developmental psychology, this is the beginning of the “concrete operational stage”, where children first become able to use logical reasoning. It’s also the age when they start learning maths at school.

Start by giving them very small amounts of spending money occasionally. Eventually you can move on to giving them regular pocket money, increasing the amount as they grow older. We highly recommend that you go step by step, from enough for sweets, to an outing with friends, working towards things your child will need to save up for, like the latest video game.

Finally, you will need to decide how often you give your child pocket money. Later, their salary will almost certainly be paid at regular intervals too. Part of managing money is being able to manage time and plan ahead. Whether it’s monthly, weekly, or even each day is up to you, but be consistent and make sure your child knows you’re not an ATM that’s open 24/7. Prepare them for the payday intervals they will have to work with as an adult.

It’s not good to dwell on it all the time, but money shouldn’t be taboo either – especially in a society like ours, that can’t seem to make up its mind. How to have a healthy relationship with money is part of your child’s education, and includes the ability to express themselves clearly on the subject for their age.

Your child will naturally be curious, and may ask you questions about money. When this happens, you should answer them, although you don’t need to launch into a lecture on economics. For example, if your child is with you at the supermarket, show them how to buy something and explain why it’s important to compare prices. Tell them where your money comes from, that you had to work to get it, and that it has value.

Children, particularly young children, learn better when they can put what they’re learning into practice.

Children, particularly young children, learn better when they can put what they’re learning into practice. This is a basic principle of teaching. To help them understand savings and keep track of how much money they have, there’s nothing better than giving them a place to stash their cash. Piggy bank, safe, treasure chest… there’s a vast choice of suitable containers for pocket money and gifts from the tooth fairy or Santa Claus. As you now know, it pays to make saving fun!

When your child is a little older and has learned the basics of budgeting, it will be time to give them access to a bank account. This is also when you should teach them to use a debit card, or perhaps even a credit card if you think they can be responsible with it. That’s more than can be said for some adults, after all!

All Luxembourg banks offer bank accounts for minors. These accounts can be limited and any overdraft blocked, so parents don’t need to worry. It’s one more way your child can safely practice doing things on their own.

Naturally, you won’t ask your child to spend the pocket money you give them on household items, groceries or even things they need, like clothes. Still, you should define which things you do expect them to cover with their own money once they start receiving it.

Generally, you should have them manage spending for non-essential items on their wish list. For example, you could let them pay for that overpriced band t-shirt they have their heart set on, since you’ve already bought them four other ones. They might be a little on the plain side, but they’re still perfectly good clothing!

Another example of something your child can buy for themselves when they’re in their teens is takeaway. If your refrigerator is full but they insist they want pizza, let them order one – with their own money.

By setting these boundaries, you establish what your child has to budget for, and you force them to think twice about their spending. To avoid arguments (which can quickly escalate into a full-blown meltdown during adolescence), try and be as clear as possible about what expenses they are responsible for.

Learning to budget means managing your spending, but most of all, it means learning not to spend until there’s nothing left.

Learning to budget means managing your spending, but most of all, it means learning not to spend until there’s nothing left. Letting money burn a hole in your pocket is easy. Saving it, on the other hand, requires discipline and the ability to plan ahead. These are fundamental skills, but people aren’t born with them. Here, too, you will have to clearly illustrate the importance of saving so that your child can internalise it for the future.

For example, you might take the opportunity to teach them about the need to save up when they want something relatively ‘expensive’. Does your child covet a laser-shooting robot toy that costs more money than they have? Let them know they can get it in just two months, as long as they save up bit by bit and add that to their birthday money. Sit down with them and make a financial plan to show them what they can achieve. For educational reasons, some banks go so far as to offer bankcards that allow children up to 12 years of age to make deposits only in their savings account. A good way to make them aware of the need for savings.

Later, you’ll be able to introduce the more abstract concept of surprise expenses. Don’t hesitate to talk to them about the things you have to save up for yourself. If you have to get the tyres changed in three months and are putting money aside, let them know.

Children who learn to deal with money at an early age – and above all, who have parents who guide them as they improve – are certainly less likely to get into financial trouble when they grow up. Here, parents should make sure they send clear messages, incorporate play and allow for gradual development.