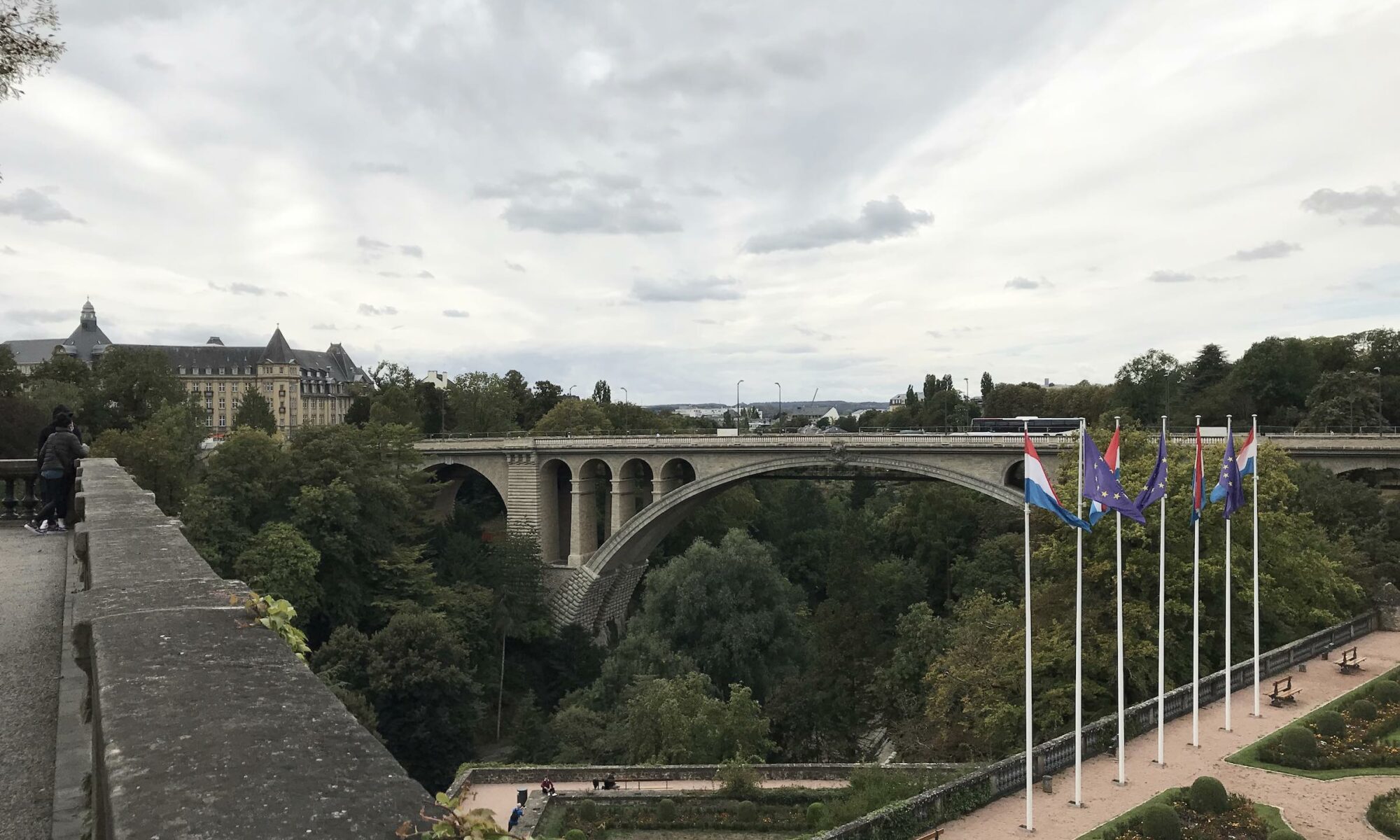 Are you thinking about moving to Luxembourg and finding a job in the country? Maybe you’ve already completed most of the formalities associated with an upcoming move to the Grand Duchy, but you still have one nagging doubt: the language. Which language(s) do you need to speak in this multilingual country? In what context? Where? Read on for myLIFE’s take on the linguistic landscape in the Grand Duchy.

Moïen, bonjour, bom dia, hello, hallo… You’re definitely in Luxembourg. You only have to take a few steps in the capital to notice. Listen out and you’ll hear Luxembourgish, French, Portuguese, English, German and many other languages. This diversity can be explained by the fact that foreigners make up more than 47% of the population (170 different nationalities) and another 200,000 people cross into the country for work each day, not forgetting locals’ multilingualism! Luxembourg’s undeniably rich melting pot can sometimes be bewildering for newcomers.

The Grand Duchy has had three official languages since the 1984 law on multilingualism: Luxembourgish (Lëtzebuergesch, the national language), and French and German, which are administrative languages. In reality, though, you’ll soon see that many other languages coexist in the country. Whereas conversations in Luxembourgish and German are more common in the north and east, French and Portuguese dominate the south. However, it is not so much geography that determines the use of one language or another, but context. Without going into too much depth, let’s try to understand the situation together.

Most of the time, you’ll be expected to have a full command of at least two languages in the business world, but the choice of language system in the workplace mainly depends on the sector.

The business sector determines which languages are used

To land a job in Luxembourg, most of the time you’ll be expected to have a full command of at least two languages including French, which is used by four out of five workers. However, the choice of language system in the workplace mainly depends on the sector.

The three most commonly spoken languages in 2018 by sector*: 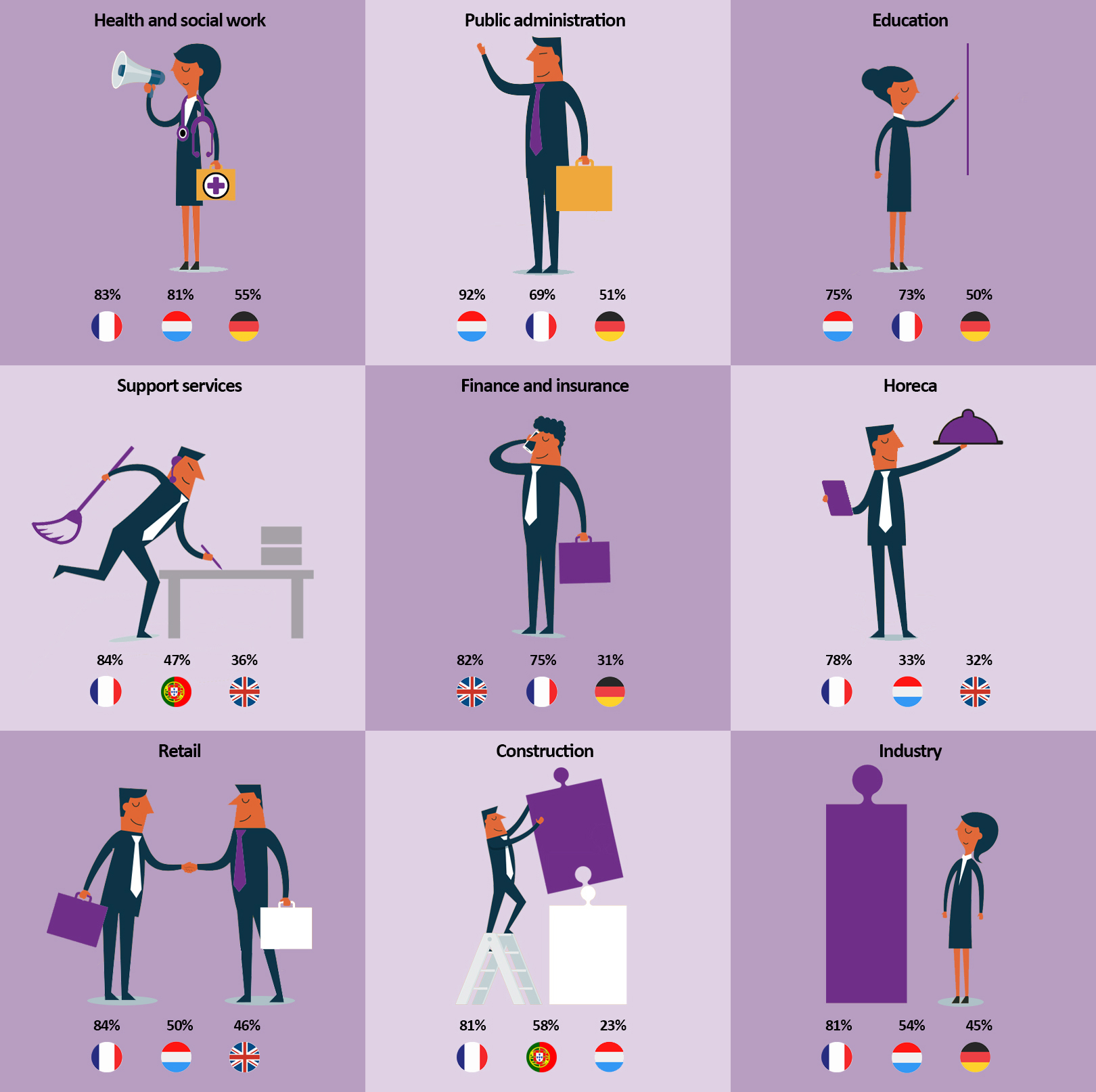 Useful info: Find out which languages are used in the company you want to work for. While English is a prerequisite in finance, German is highly sought-after in banks headquartered in Germany, and for logistics positions that involve working with our neighbours from across the Moselle River.

A wide array of language courses

You will have no trouble finding beginners’ or advanced lessons for the languages used in the country. Learning Luxembourgish is becoming more popular, especially since the reform of nationality laws, requiring basic knowledge of the national language.

Courses for adults are offered by the Institut National des Langues (INL) as well as professional chambers and even some schools and colleges. There are also plenty of private bodies offering a variety of options: private, group, work-based, remote and telephone lessons, etc.

To help you find the lessons best suited to you, visit the lifelong-learning.lu portal, which offers a wide range of courses.

Useful info: If you need to brush up on your Luxembourgish and are already in a job, you can take 200 hours of language leave over your career. Ask your employer for more information.

Schooling is multilingual in Luxembourg. Your children will receive lessons in different languages, depending on their age and school year.

A multilingual approach at school

Multilingual schooling is just one of the things that make Luxembourg unique. If you are coming to the country with your family, your children will receive lessons in different languages, depending on their age and school year.

Teachers mostly speak in Luxembourgish during key stage one, with an introduction to French. They then communicate in German, before switching to French in later years. Pupils thus come into contact with at least three languages during their time at school, not to mention those studied at secondary level (from the age of 12), such as English, Italian, Portuguese, Spanish and even Mandarin.

Useful info: Children who have just arrived and do not understand the language used in class can join an induction class or take language support lessons in Luxembourgish or German, to help them adjust. There are also several European and international schools in the country, where English and French are used as working languages.

Locals naturally switch from one language to another mid-conversation.

Which language(s) should be used in everyday life in Luxembourg?

Linguistic diversity is part of everyday life, too, and the various languages naturally come into contact with each other. Don’t be surprised to see locals switching from one language to another mid-conversation. It happens a lot!

When you’re out shopping, you may be spoken to in French, Luxembourgish, English or German. In restaurants, you might be addressed in French or English. Depending on the type of establishment, you may even be able to order in Italian, Portuguese, Spanish, etc. You can read (physical or online) newspapers in Luxembourgish, as well as in German, English, French and Portuguese. In hospitals, you should theoretically be able to find people who can speak the country’s three languages. This will also be the case for administrative matters: with the local authority, tax, social security, bank, insurer, etc.

Useful info: Cultural life is also multilingual in the Grand Duchy. For example, many bookshops sell works in different languages; theatres have an international programme; cinemas show films in their original language with subtitles in French, German or even Dutch.

While language practices are varied in Luxembourg, knowledge of Luxembourgish is considered a big advantage in settling into the country, both privately and professionally. Adding a Villmools Merci or Äddi to a sentence, entering a shop with a Moien or gudde Owend and being able to say a few words to your neighbours in their language will always go down well. Take the plunge and immerse yourself in Luxembourgish; its diverse influences will help you to truly connect with the culture of the region. Bis geschwënn !

* Source: Results of a workforce survey conducted by Statec among Luxembourg residents in 2018, reported in Regards No. 9 05/2019: “Luxembourgish remains the language most commonly used at home”.