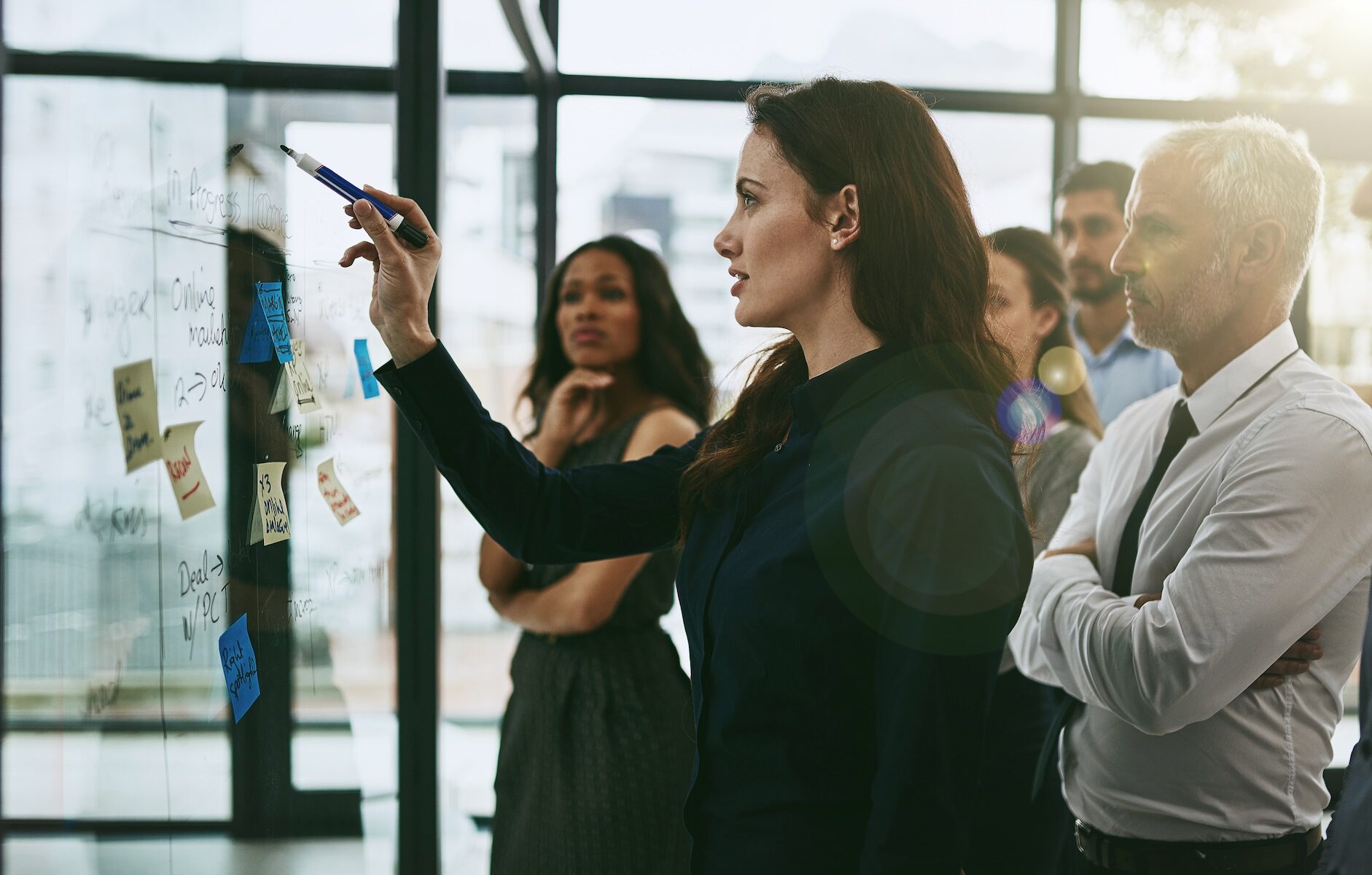 For many years, the leadership role in companies and institutions was considered an exclusively masculine domain, but that is now changing. As more women rise to senior positions within businesses, we are increasingly talking about feminine leadership. Is there really a unique feminine leadership style?

Everyone knows that it’s difficult to agree on what makes a good leader, and what distinguishes a leader from a manager. Discussions get even more heated when we talk about feminine leadership, the advantages for businesses and the potential differences between masculine and feminine leadership styles. And for good reason; the more we try and generalise based on gender, the less the distinctions and categories put forward do justice to the complexity of the situation and the uniqueness of the individuals concerned. We all know men with a management style characterised by traits that are traditionally considered feminine, or conversely, women who run their teams in a masculine style.

Our aim is not to cause controversy with a discussion of such questions in this article, and we will try not to make too many sweeping generalisations. We simply want to raise a few issues, share some observations and provoke a little reflection.

A manager has a role that involves exercising authority, a leader is someone whose state of mind and way of being means that they are able to influence others.

What makes a good leader?

Before we have a look at any differences between the leadership styles of men and women, we need to agree on what makes a leader. And the first thing to say is that the title or role is not what makes a leader. A manager has a role within an organisation that involves exercising authority. A leader is someone whose state of mind and way of being means that they are clearly able to influence others.

When we speak of leadership, we generally mention an individual’s ability to inspire trust, guide, motivate and influence others so that the team can achieve certain targets set by the organisation. Leaders don’t necessarily occupy higher positions than those they influence.

Based on the 10 rules of leadership that we describe elsewhere, it is clear that the attitude of a leader is neither masculine nor feminine. If this impression is correct, the different types of leadership are therefore not linked to gender, but to a person’s ability to apply and demonstrate these leadership traits, irrespective of whether they are a man or a woman.

The different types of leadership are not linked to gender, but to a person’s ability to apply and demonstrate leadership traits, irrespective of whether they are a man or a woman.

What does it take to become a good leader? Among the soft skills often cited, the main ones are humility, integrity, a willingness to grow and move forward in order to achieve an ambitious vision, the emotional intelligence to generate commitment, self-confidence, the ability to focus, the pursuit of excellence, a results-oriented attitude, and an innovative approach.

Good leaders must have a sense of who they are, where they are, where they want to get to, and how to get there as a team. This requires presence and insight (to ask the right questions and understand the challenges of the environment), legitimacy and expertise (to stick to your convictions and take responsibility for your decisions) and sincerity and openness (to establish and maintain relationships). It’s hard to claim that these traits are more masculine or more feminine. Anyone making progress on these fronts will also become a better leader.

Agreeing on this issue should be the end of it. Why isn’t this the case? Because when we talk about feminine leadership, we mostly confuse the attitude of the leader and the style of the manager. Most discussions focussed on feminine leadership and its advantages for the company are really discussions on the need for more women managers in companies. And this isn’t the same thing at all.

Greater equal opportunities in access to management roles provide greater choice from which to select the best possible candidate for a job.

Choosing diversity is an asset for companies

For a long time it was assumed that managers would be men. Today the glass ceiling is finally cracking and more and more women are rising to managerial positions. This is cause for celebration! In fact, greater equal opportunities in access to management roles are a real advantage for any company, as they obviously provide greater choice from to which select the best possible candidate for a job. This represents a structural improvement for the company’s organisational performance, as it creates a management team with a broader range of aptitudes, attitudes and means of expression. Diversity is a clear asset for companies, and equal rights are what need promoting right now, not uniformity.

There is a tendency to attribute a feminine management style with qualities such as empathy, caring, altruism, sharing and listening that are essential for winning the trust of staff members, encouraging their commitment or influencing corporate results, although we have no real evidence for this. This type of management remains focused on results, but also highlights the team and its collective wellbeing. These soft skills proved more critical than ever during the pandemic when team connections and spirit may have been undermined by homeworking and an introspective tendency in response to a stressful environment.

Confirming that some management attributes are more feminine does not in any way mean that women managers are incapable of demonstrating strong convictions, determination and self-confidence, characteristics that are often attributed to men.

What are we trying to say here? Firstly, that there is no threat to a company from diversity at all levels. Secondly, that this diversity is only an asset if it is accepted for what it is: a force for achieving common goals, and not a problem to be solved by imposing a single mould to which everyone must conform. In other words, if leadership transcends the issue of gender, this seems much less clear-cut on the issue of managerial style, and this is an opportunity for companies able to embrace diversity in its widest sense, not solely on gender issues.

Let’s finish on this point with a reminder that climbing the corporate ladder has a price you must be willing to pay in terms of drive, commitment, daring and resistance to stress. Not everyone is capable of this, or even wants to. We are therefore calling for companies to create the conditions for fair access to management positions, and then let each individual decide for themselves if they want to have a go or not. The critical point is not to decide on someone else’s behalf on the basis of their gender or some other criteria unrelated to the job on offer.

How are we doing in Luxembourg?

Although stereotypes persist and can block personal development, in Luxembourg, women managers seem to be inspiring as many employers as their male counterparts. There has been progress. Although it may not be happening as quickly as some hoped for, there is a trend towards more women in management roles. The government is testimony to this, with five women ministers. Indeed, the government itself set the objective that 40% of the boards of public bodies and companies in which the state is represented should be women. Mission accomplished in 2019!

In Luxembourg, 2,300 women held executive positions (directors, senior executives or managers) in 2019 according to Eurostat figures. We can see clear growth since 2016 (600). This professional category has seen the greatest increase in the proportion of women in recent years (from 18% to 26%). There are more and more women in positions of authority: women entrepreneurs with a desire to create and invest, managers at the helm of companies or directors of public institutions. We can cite the examples of Michèle Detaille (the first woman to head up Fedil), Sasha Baillie (CEO of Luxinnovation), Nora Back (Chair of the Chamber of Employees)and Yuriko Backes (the first woman Maréchale de la Cour, chamberlain of the Luxembourg royal family).

With a gender pay gap of 7.2% (1.6% for hourly wages) and an increasing number of women with degrees, at first sight Luxembourg seems to be performing well in comparison with other European countries. However, many improvements are still required to promote equal opportunities in access to positions of responsibility, and equal pay for equal work.

Offering everyone the same opportunities increases the likelihood of getting the best out of everyone and enhancing the overall skills level within a company.

Another point worth mentioning, the proportion of women in employment is rather low at 38%. Professional “segregation” is also particularly high: women are better represented in certain sectors such as health and social care (75% of employees), in contrast to industry (17%). Should we rejoice in these results that reflect gender-related preferences, or regret the inequalities resulting from the remaining barriers to entry? We don’t have a position on this topic. Rather, we would like to see all forms of diversity promoted unreservedly at all levels of society generally, and at the head of institutions and companies in particular. Offering everyone the same opportunities increases the likelihood of getting the best out of everyone and enhancing the overall skills level within a company.

Women are emotional bosses with strong people skills, men are strong managers who put the individual before the collective good: stereotypes are hard to break when it comes to positions of responsibility. Rather than quibbling about who’s right, it is better to promote leadership without any gender-based barriers and let every person be the best manager possible based on their aptitudes, values and specific characteristics.