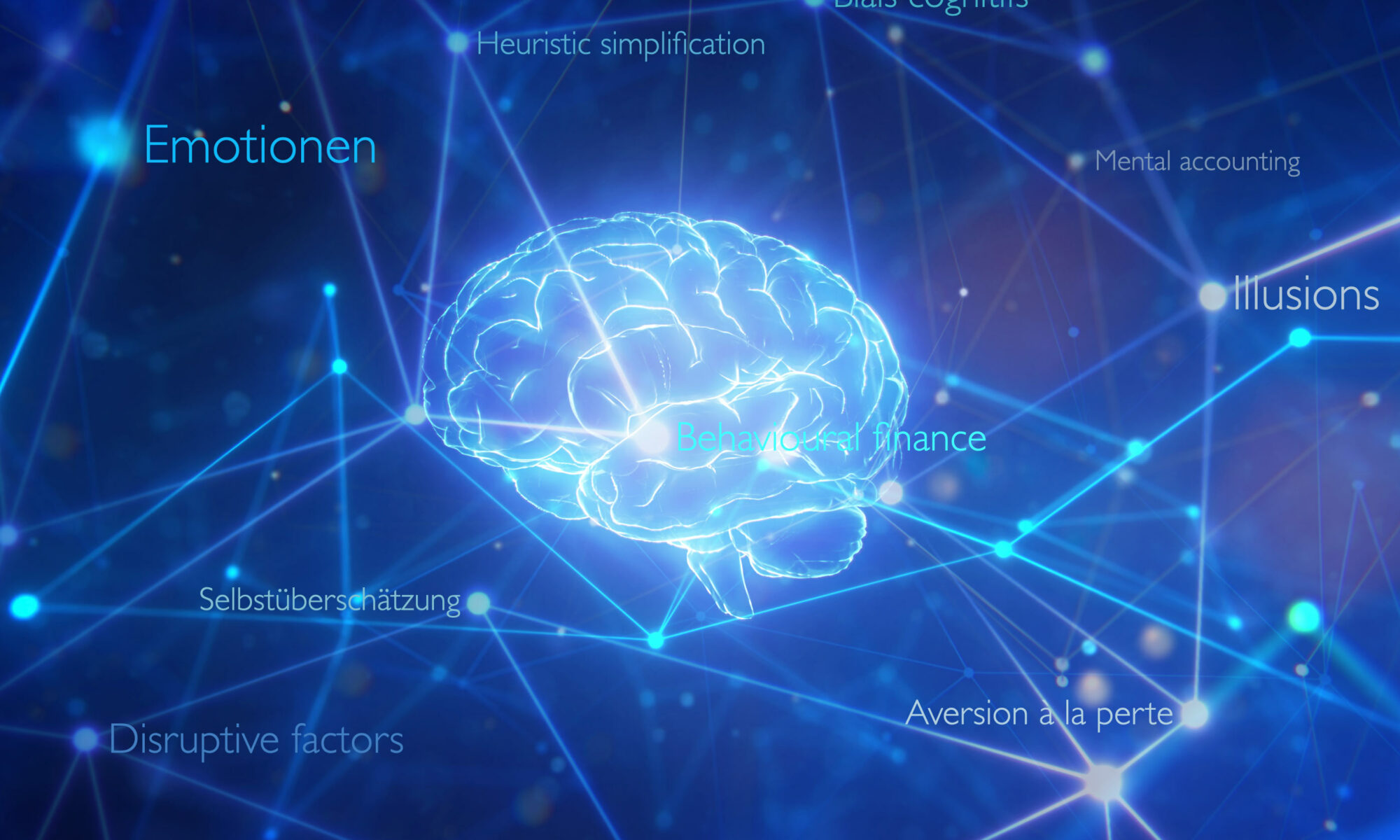 Behavioural finance seeks to highlight our irrational behaviour around investments, money and savings. It draws on a number of disciplines, including psychology. We thought it may be useful to pull together a toolbox for you covering the basic concepts – use liberally to help make better reasoned and more reasonable financial decisions.

What is behavioural finance?

Behavioural finance’s starting point is to challenge traditional economic theory that assumes that individuals are perfectly rational. In fact, it claims that we are not fully rational beings capable of objectively assessing all aspects in play in order to arrive at the decision that is in our best interests.

Behavioural finance takes account of psychological influences on the behaviour of investors or financial analysts. It provides an explanation for errors of judgement in financial decision-taking and market anomalies, via a checklist that enables each of us to become better acquainted with our faults, emotions and cognitive bias. The stated aim is to help you take a more rational approach to finance, which will be beneficial for your wallet.

The four disruptive factors that can spoil everything

Behavioural finance identifies four categories of concepts that may lead us to make mistakes when taking decisions.

It is difficult to be aware of all the factors influencing our financial decisions. And knowing how to identify them does not guarantee that we won’t fall victim to them. So before we present a number of key concepts of behavioural finance to you, we must emphasise that support from the knowledge and objectivity of a financial expert is extremely useful when taking financial decisions.

There can be no doubt that loss aversion is the most important driver of human decision-making.

There can be no doubt that loss aversion is the most important driver of human decision-making. It is a legacy from our ancestors, whose survival depended on their ability not to waste their scarce resources. The most primitive part of our brain has retained this instinct and adapted it to modern life. This means that we take a different approach to risk, depending on whether we perceive it as a risk of gain or of loss. Research has shown that the pain felt by investors on a loss is over twice as high as the pleasure of making a profit of a similar level. Losing EUR 100 affects us twice as much as gaining the same amount.

In the context of investing, this may translate into holding onto a share even though it is continually falling in value. Why? Because until the loss is crystallised or real, the brain has the illusion that there is no loss and this therefore postpones a form of suffering. Paradoxically, loss aversion may also result in us taking more risks over the long term than we would really wish.

Confirmation bias is the tendency to accord greater importance to information that confirms our beliefs and to ignore anything that contradicts them. Rather than confronting our opinions with opposing facts, we prefer things that validate our views, as this gives us a feeling of well-being and self-worth. This bias feeds our prejudices and limits our ability to take rational investment decisions.

You might be so determined to be right about how to invest your savings that, without even realising it, you only consider information that confirms what you thought before in order to build a simple narrative that your brain can absorb without effort. The upshot of this is that you substitute the complex reality of investing with an utterly biased mental illusion that backs up the decisions you had already made. This should be avoided at all costs.

Overconfidence bias is our tendency to overestimate our abilities. This may lead an individual to believe that they are a much better driver than the average, despite a few failings such as reading texts whilst driving.

When investing, overconfidence bias often leads people to overestimate their understanding of financial markets or certain investments, and to ignore information provided by experts. Overconfidence may therefore lead you to overestimate your risk tolerance and to adopt investment strategies that are not properly suited to your investor profile.

Status quo bias describes our preference for maintaining the current state of affairs. It translates into a certain resistance to change. Status quo bias is comfortable because it makes decision-making easy, particularly when we don’t know what to do or feel overwhelmed by the numerous options presented to us.

Public policies and some commercial brands have fully understood this when setting default options, for example, when selecting the core components of service subscriptions. Careful attention should always be paid to these default options, and this holds true in the field of investments. Making the cognitive effort to consider or even to opt for change allows us to make the choices that are best for us when we take financial decisions. Even if we ultimately choose the status quo, it will be an informed choice.

In behavioural finance, giving too much weight to what we see as an immediate necessity is called present bias. This bias prevents us from clearly and objectively assessing our actual long-term needs, making us prefer immediate rewards.

Present bias means that we find it hard to resist the temptation of immediate gain, so we tend to prefer short-term financial benefits at the expense of long-term savings intentions. It is also at the root of our tendency to procrastinate, and makes some of us repeatedly put off until tomorrow what we could do today.

This mental exercise works against the fundamental economic principle that money is fungible, in other words, one euro is just as good as another.

Richard H. Thaler, who was awarded the Nobel prize in economics, defined mental accounting as “the set of cognitive operations used by individuals and households to organise, evaluate, and keep track of financial activities”.

In performing this exercise of mental accounting, families regularly evaluate their income and activities and create well-labelled mental accounts. Each account is attributed funds that should only be used for expenditure that corresponds exactly to the account description. Ultimately, mental accounting seems to make perfect logical sense. But this mental exercise works against the fundamental economic principle that money is fungible, i.e. the principle that one euro is just as good as another. Households keeping mental accounts that take too rigid an approach to account labels trap themselves in an inflexible system of non-transferable budget items and this strategy has a direct impact on their choices and quality of life.

Cognitive dissonance refers to inconsistencies between firm beliefs and individual behaviours. This phenomenon results in what is called an attitude-behaviour gap. In concrete terms, it means our good intentions don’t always lead to action. It comes into play when we say we’re going to save more money but never actually do so. Or when we promise ourselves that we’ll finally get out and exercise every day, but not until tomorrow.

The anchoring effect relates to how we use the first bit of information we receive as a psychological reference point to shape our judgement about a second piece of information. In terms of prices, there’s therefore a strange phenomenon called the left-digit effect.

The left-digit effect relates to the way our brain converts numerical symbols into mental quantities, as well as the fact that we read numbers from left to right. When comparing the prices €2.99 and €3.00, our brain first looks at the number 2, and will tend to think that €2.99 is much more attractive than €3.00. Why? Because our brain has encoded the size of 2 compared to 3, even before reading both prices in full and assessing the item’s other characteristics, or the differences between two closely priced items.

FOMO (Fear of missing out)

FOMO is the fear that makes us anticipate the regret we may feel if we don’t take advantage of an offer that looks unmissable to us. During the sales season, stores flood social media and other platforms with special offers. This media saturation has a powerful influence on us and creates the impression of a major social event characterised by unique opportunities. We don’t want to miss out on this “while stocks last” opportunity that is presented as temporary or even ephemeral. In psychological terms, this rarity value heightens the perceived value of the goods. So we tend to buy more, or things we don’t need, just because we are afraid of missing out.

The clustering illusion refers to the tendency to see signs of destiny or coincidence in random data.

The clustering illusion refers to the tendency to see signs of destiny or coincidence in random data. Human beings tend to disregard variability in a random series. This phenomenon applies in particular to short-term investing. Winning two or three bets in a row does not mean that luck is on your side, that you’ve got the magic touch or that you’re on a winning streak. The risk is that we get carried away and immediately reinvest any small gains in other, bigger bets purely because we think we’ve got the knack and spotted a trend. But there’s nothing to say that the future will be a repeat of the past and we have to accept that sometimes random chance alone is the reason for the outcome. Be careful, conviction that is not based on tangible proof can end up being very expensive.

In behavioural finance, herd mentality refers to the tendency of investors to follow and copy what other investors are doing. It’s what we call following the pack in everyday language. Herd mentality is very powerful, particularly on financial markets, and should be treated with great caution. It is frequently what causes the formation of financial bubbles, and was specifically responsible for the bursting of the tech bubble. Many investors blindly follow their peers without checking that the economic fundamentals of the companies in which they are investing are sound. If you have no tangible basis for your financial choices, beware the influence of fashion.

We’re all programmed to love stories. Why? Quite simply because we need to know that things happen for a reason, even if that means inventing a reason. Stories generally have an emotional hook that makes them easier to remember. The problem is that we take this as our starting point and then unconsciously apply an internal filter and value information that confirms our chosen narrative rather than taking contradictory information equally seriously.

Little by little, the stories told and retold by countless economic players coalesce to form what the winner of the Nobel prize in economics, Robert J. Schiller, calls “economic narratives”, such as those relating to gold. He believes that narratives can sometimes shape market reality itself rather than the opposite. And yet this reality is fragile because it has no sound economic basis. For example, gold has the value it does because it is perceived as a safe haven. But what would happen if all of a sudden nobody believed in its value? It would collapse!

Behavioural finance can help to identify the cognitive bias likely to distort our judgement when taking important financial and investment decisions. Forewarned is forearmed, and you now have a better basis for making your decisions. If you need more help, you should never hesitate to seek the advice of a recognised expert.